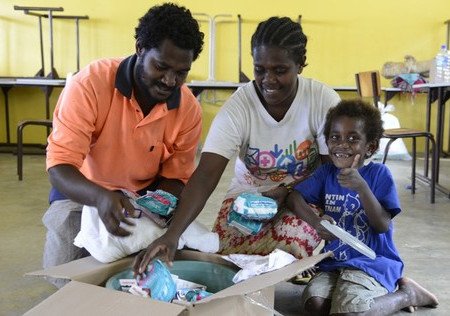 Hygiene kits are distributed at Lycee Bouganville school which is acting as a temporary evacuation centre. Photo credit: Amy Christian/OxfamAUS

By Oxfam Communications Coordinator Amy Christian, in Vanuatu
Yesterday I arrived in Vanuatu to join the Oxfam emergency response team as they respond to the aftermath of Cyclone Pam.As our plane descended into Port Vila, I caught glimpses of the islands that make up Vanuatu between perfectly formed clouds, which looked still, as if in a painting — the blue of the ocean a calm turquoise canvas beneath. The islands themselves looked ravaged, trees torn and broken and houses left without roofs or walls. I found myself imagining how different this view would have been just a week before, on the eve of the biggest cyclone to ever hit the Pacific.